The Ecomodernist Manifesto from 2015 is summed up in one sentence: Ecomodernism is “decoupling from nature consumption” instead of “dependence on nature”.

Critics say that ecomodernism thus stands for an alienation of humans from nature – because it pursues the extreme goal of settling the world’s population only in large cities and leaving nature to its own devices.

But what is really meant by this?

The land use on earth is currently divided as follows:[1]Land Use, by Hannah Ritchie and Max Roser, September 2019.
https://ourworldindata.org/land-use

As we can see, the settlement of the earth with 7.89 billion people[2]Statistics on the world population, published by Bruno Urmersbach, 25.08.2021.
https://de.statista.com/themen/75/weltbevoelkerung/ with cities and villages makes only 1% of the land area. Land is mainly occupied by agriculture and forest. A problem for nature is the competition of agricultural land with forest, which serves us as CO₂ storage. Sustainably left forest that is not regularly cut down and used as fuel serves us as a permanent CO₂ sink as well. Of course, forests can never offset immense fossil CO₂ emissions, but they can prevent soil erosion, store water, and cool the soil, which can at least influence microclimate and precipitation patterns over land.

Agriculture versus biodiversity and forests: the real battle for nature

Within agricultural land (fourth bar from the top), however, we already see the real problem: food from animal products occupies three-quarters of the total agricultural land for pasture and fodder for 18 percent energy yield from food, while direct crops cover 82 percent of the energy yield from food with only a quarter of the land. So vegans are not at all wrong when they say they are protecting nature.

In a 2013 study by the German Federal Environment Agency[3]Using global land area and biomass sustainably and resource-efficiently, 2013, p. 9
https://www.umweltbundesamt.de/en/publikationen/globale-landflaechen-biomasse, the globally available agricultural land is further broken down by area. Here, the fourth bar from the “Our World in Data” chart above should be compared with the second bar from the UBA chart:

Again, it is clear that the production of forage competes directly with human food production, even if the pasture land cannot be used directly as cropland. Less animal husbandry on the same pasture area would take up less land for feed production.

Biodiversity as an approach to nature conservation as a whole calls for smaller plots with different plants on them. However, smaller contiguous areas are more cost-intensive to cultivate and are often the domain of smaller farms, whose problem, however, is to be able to cover their costs. The large-scale cultivation of energy crops and plants as feed for livestock works against biodiversity.

If this land is additionally taken up locally for the technical use of renewable energies such as wind power and open-space solar plants, this in turn competes with agricultural use and forests. In this context, soil sealing for access to such facilities is also a point that must not be underestimated.

Ecomodernism does not mean driving people out of rural areas

The task of an eco-modern approach should therefore be to continue to allow people to settle in their current areas, be they urban or rural, be they high-rise buildings or single-family homes in villages.

The far greater leverage is in agricultural use. If we reduce these areas or change their use, it will directly benefit nature and forest areas. We should start with the excessive use of land for livestock, but some crop cultivation can also be brought directly into cities with vertical farming. However, this form of agriculture needs clean and cheap useful energy. Short distances and less use of pesticides would be the advantages.

If man is to detach himself from nature, this does not mean that he should respect it less, but on the contrary: he must emancipate himself from it insofar as he is no longer negatively dependent on it – in order to be able to leave it alone.

The key to eco-modernism therefore lies in the type of useful energy production and in a nature-compatible, biodiverse, integrative land use of agriculture, which, however, also needs affordable and available energy.

With this kick-off to my blog, I want to tell you how I came to this topic of “ecomodernism”.

I was 17 years old when, on April 26, 1986, the event happened that dealt a blow to nuclear energy worldwide from which it would never recover to this day: Chernobyl. From then on, the Greens, who had just been elected to the German Bundestag three years earlier, felt confirmed in the position they had held since their founding: The world must finally get out of “the nuclear”.

I grew up here in the Markgräflerland, south of Freiburg, as the son of a master vintner, 11 km from the Fessenheim nuclear power plant and 38 km from the Wyhl nuclear power plant, which was still being planned and fought against at the time. I remember very well when the news came about the small transistor radio that we carried with us in the vines while “tying up”. We had showery weather, it was raining lightly.

South Baden is one of the strongholds of the anti-nuclear movement. The “energy rebels” of the EWS Schönau have their headquarters beyond our local mountain Blauen. This is how I was socialized as an opponent of nuclear power: everyone of us here saw Fessenheim as a danger. In 2000, it was clear: the nuclear phase-out, the energy turnaround and the Renewable Energy Sources Act (EEG) must be established politically and legally. The goal of converting the energy industry to 100% renewables was set.

Enthusiasm for electric mobility – triggered by the Tesla Roadster

I first became interested in the subject again in 2008, in the middle of my professional life as a business information scientist – rather by chance, because at that time my wife was doing an internship at a PR agency that advised companies in the renewable energy sector. In 2008, Tesla (then still Tesla Motors) also introduced its Roadster, and from then on, electric mobility in particular was my first topic in this direction – and it still is.

The second nuclear accident in Fukushima in March 2011 fell on the fertile ground of my previous attitude. From then on it was clear to me: 100% renewable energies (RE) were needed. From then on, I dealt extensively with the topic of RE, also in connection with electric mobility. In 2012, the then managing director of the Müllheim-Staufen public utilities approached me about becoming a co-founder of an energy cooperative (BEGS) and a member of the supervisory board. Since then, I have been a founding member and have even given small talks here and there about the energy transition and electric mobility.

In 2011, I switched to an Opel Ampera, followed by a Tesla Model S 85 in 2014 – I’ve been driving fully electric ever since. In 2015, I also took part in the WAVE Trophy. Combustion engines must be replaced by electric motors, because only then can the switch in electricity supply to CO₂-free energy sources also automatically make transport CO₂-emission-free. Otherwise, the car will first have to wait for synthetic fuels, and that takes too long.

The break: a visit to Amprion’s Brauweiler system control and Hambach open lignite mine.

It came as it had to come: after arguing time and again with the “evil nuclear energy lobby” of Nuklearia on Facebook, I received an invitation from a work colleague to visit the Amprion network control room in Brauweiler in October 2018, even with a lecture and guided tour by the head of system management, Joachim Vanzetta, current Chair of the Board of ENTSO-E. I was delighted to receive first-hand confirmation that we are on the right track with the energy transition and 100% renewables.

The day before, I still visited the lignite misery at the Hambach open pit mine along with the dwindling Hambach Forest – fossil energy sources are and remain the real problem – that was always clear to me. The lecture on the day itself was sober and very informative. We learned a lot about buying electricity and managing a power grid, and that working on a power grid has nothing to do with balanced energy quantities. The system management only works with all kinds of software support with 15-minute updated forecasts for renewable energies, which, as we know, have priority in the power grid and according to whose supply all power plants must – and so far still can – flexibly adjust.

Hardly any wind, no sun

The foggy day itself was rather sobering for renewables: hardly any wind and no sun. We were even allowed to visit the main switchboard, where otherwise only experts and high-ranking politicians are granted exclusive access. The engineers had their hands full keeping the lignite and nuclear power plants at full load and buying power on the market. The large red-green-yellow laser display on the main switchboard in front of us showed Amprion’s entire network with the power values currently being run. Almost always, something has to be readjusted.

With these impressions in my luggage, I went home again – to argue with the ‘Nuclearians’ on the net about the energy turnaround – or so I thought.

The visit had done more to me than I first thought. What serves demand of electricity at any given time when renewables are not delivering? The power must be kept available – how does that work? Permanently and surely only with power plants that can follow the demand.

But everything has to be CO2-free, that’s the only way it makes sense. It was the time when I had to think anew about an energy turnaround with “100% renewable”.

In connection with this, I unfortunately don’t remember exactly how it came about, how I found the Ecomodernist Manifesto and took a closer look at it – because two months after the visit to Brauweiler, I then tweeted about it for the first time: 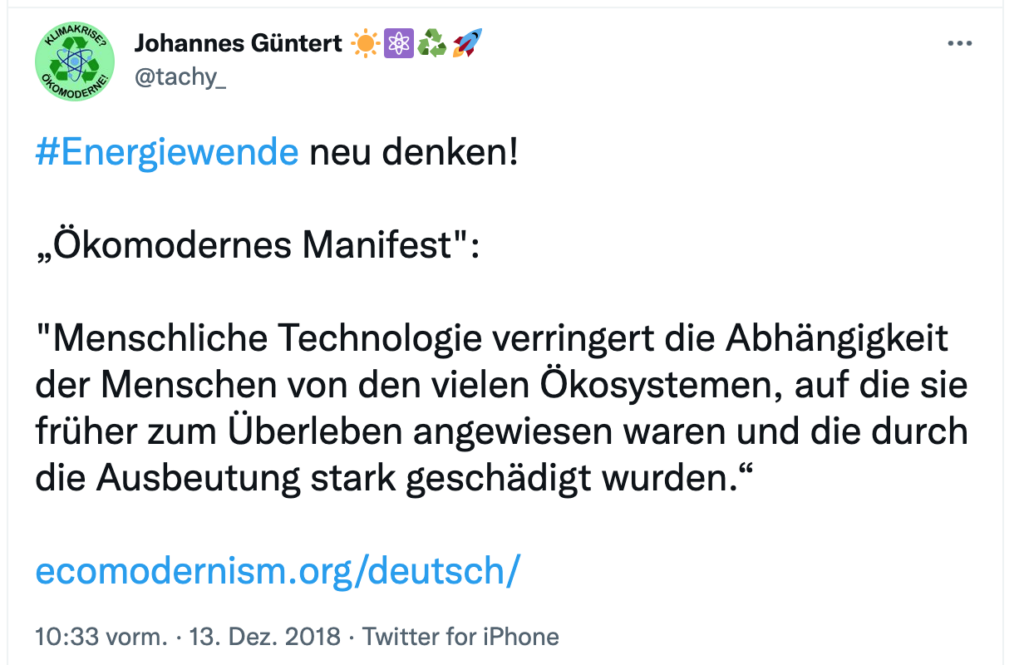 The ecomodern approach says: we must avoid our harmful impact on nature, even though we produce and consume energy, use raw materials, practice agriculture and live a life of prosperity. This impressed me a lot as a concept, because I have never been able to do anything with “DeGrowth” (practicing radical renunciation and avoiding economic growth), but have always preferred technical solutions to the problem of climate change. And now I also knew why I felt so uncomfortable at the one anti-nuclear demonstration against Fessenheim in 2011 after Fukushima. Because it is instinctively not my style to demonstrate so naively against technology.

Therefore, I started to question nuclear energy anew as well, to inform myself about the current state of affairs (for example, I shared this article about the new generation of nuclear power plants in the “Süddeutsche Zeitung” on Facebook already on Dec. 4, 2018) and had some insights as a result. From now on I started to make my peace with nuclear power and also with Nuklearia. Nuclear energy itself is not the end in itself in ecomodernism, but only a means to an end. I, at least, got answers to my questions about “nuclear waste”, safety and costs….

For me, ecomodern energy means nuclear energy plus renewables, but without the fossil backup and storage madness.

But these questions are meant to be the start of many more posts on this blog explaining the how and why of an eco-modern approach to the climate crisis and environmental protection.